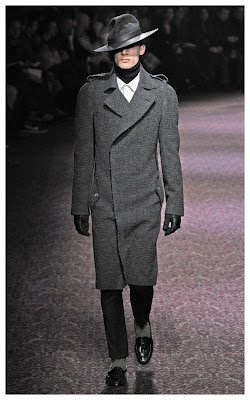 January 2011 Mens fashion week hosted in paris brought many interesting looks. Double breasted blazers, tweed, and a forties detective look filled the stage. Not to many color options with menswear this Fall 2011; Color pallets with black and grey with a hint of paprika swept the runways. Loose fitting trousers and long coats, story of the jewish rabbi. Lanvin (Picture Above) uses the doubled breasted coat with a non traditional silhouette, asymmetrical sweaters, and a chic fadora. "The tension arose from the face-off between the classicism of the Old World and the urgency of the New." Tim Blanks stated on Style.com.

Demetrius Mickens
New York, NY, United States
I am a 22 year old artist, my interests range from fashion, visual art, architecture, music. Just a passion and a dream trying to make it in the industry.

Promote Your Page Too